The Aminogen Herbalife supplement is a proprietary blend of digestive proteases from Aspergillus niger and Aspergillus oryzae. The function of these two microorganisms in biotechnology is to produce extracellular enzymes to aid in the correct and rapid digestion of proteins consumed from foods or food supplements. Enzymes are involved in the proteolytic breakdown of proteins in the intestine.

Aspergillus niger is one of the most common species of the genus Aspergillus. It is a fungus that produces a black mold on vegetables such as lettuce or tomatoes. Aspergillus oryzae is a less common fungus, commonly ingested in Japanese cuisine.

Aspergillus enzymes have a long history of safe use in the food industry and are legally approved by the FDA. These enzymes are made from microbial material, which is natural to the body. They are the most potent in activity, so they are preferable to other types of enzymes for use.

These enzymes are the most popular in natural supplements. The four most common are proteases, lipases, amylases, and cellulases. They are grown from Aspergillus in the laboratory on plants such as barley and soybeans.

Of all the microbial enzyme variants, these are the most active and potent. This means that they contain high activity units and can digest more fats, proteins, and carbohydrates over a wide pH range than enzymes from any other source. They can also be used in one formulation or another to correct certain diseases and in a systemic enzyme therapy regimen.

The following enzymes are used in the supplement:

Proteases (acid-fast, neutral) break down protein and support the immune system when taken on an empty stomach. Measured in units of proteolytic activity HUT (proteolytic units).

How does it work? What are the benefits? 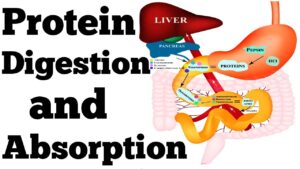 When an increase in muscle mass is needed, large amounts of protein are usually consumed. One of the alternatives to increasing the amount of protein in the diet is protein shakes. The average rate of protein absorption by the intestine is about 20 gr of protein. However, many products provide higher amounts, and digestive enzymes such as Aminogen are often used to facilitate the correct assimilation of this protein.

Different studies carried out with these enzymes have shown that the absorption of proteins is improved and also the concentration of amino acids in the blood is increased to a greater extent. It, in turn, contributes to the greater retention of nitrogen. It was observed, that they reduced the levels of C-reactive protein. C-reactive protein is produced by the liver and its level rises when there is inflammation in the body.

The concentration of amino acids in the blood is related to the stimulation of protein synthesis. For this reason, the consumption of proteins with Aminogen Herbalife tablets helps to increase training adaptations and muscle mass gains.